Monsterfest Science and Technology Festival is currently running in Inverness. On the 14th of June class 2A attended the festival’s school day with Mrs Coulshed. They took part in 10 different workshops doing everything from investigating tree-hugging to petting some extremely ‘creepy’ crawlies. 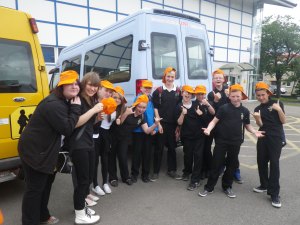 The pupils all enjoyed their day and have made accounts of some of their experiences to share the highlights of the day with everyone else.

One of the workshops was plumbing. We liked it because we got to do stuff. We built pipes and tested them by putting water in them and if there was a leak, we got wet.

We went to a station called Sonic Tree Hugging and the guy there was talking about how the experiment to check if a tree is healthy or rotten is very expensive. He put the equipment right round the tree and we looked on the computer to see different parts of the inside of the tree. We learned lot and hope we can go next year!

We enjoyed going on the bike because it was a competition to see who could get the highest wattage. It was really fascinating learning about professional cyclists and their diets.

The first experiment was to do with thunder and we made ‘Air Bangers’.

The second experiment was to do with air pressure and how the size of a marshmallow is affected by the pressure in a vacuum. The presentation was a highlight of the day.

At one of the stations we had to hold our noses and eat a jelly bean and we couldn’t taste anything. If we let our noses go, we could then taste it.

Another station timed how long it took for us to catch a duck with a hook. We then had to put goggles on that make everything blurry and weird. We had to try and catch the duck again and see how long it took with the goggles.

We saw lots of animals such as Tarantulas and snakes. The man with the animals was very friendly and we got to touch and stroke the animals which was good.