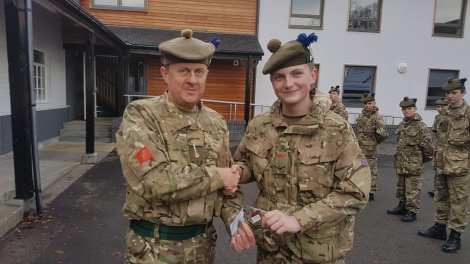 Jack Davidson received a Bronze Duke of Edinburgh Award, he completed his two star syllabus so received a certificate for that, in addition he was promoted to the rank of Corporal, he is pictured receiving his awards and promotion from our Company Commander, Major MacDonald.  Jack has worked extremely hard this year to attain this level and we in Alness Detachment are very proud of him.

Corporal Harry Dawson also received his Bronze Duke of Edinburgh Award, he has worked very hard and is carrying on to do his Silver Award with the cadets.